Here is a hand from the Spingold Final in 2014: 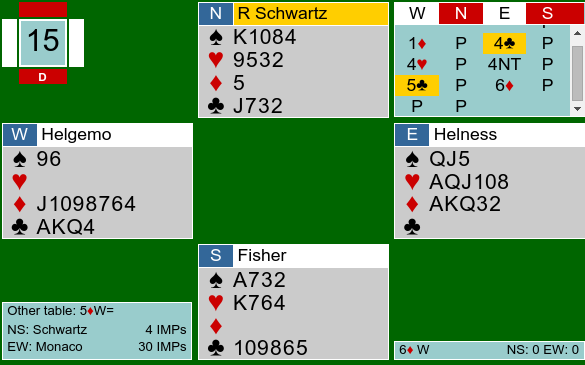 What would you lead as North?

To me the bidding calls for an aggressive lead. You would need less in spades (the queen being enough) to set up a trick. Here a spade lead would be an even greater success as you hit your partner with the ace to defeat the contract.

Ron Schwartz chose a heart from four small and declarer had 13 easy tricks. His reasoning? “It’s dangerous to lead away from kings against a slam”.

Another peculiar lead in my view came in the quarter final of the same Spingold (Board 23, Open room):
Some browsers has problems with inline display of bbo viewer.Click here if this is the case.

Ron led a club, which you can see hit his partner really well, but the patient died as declarer had plenty of tricks in diamonds and spades. “Why did you lead a club?” I asked. “I have to lead my partner’s suit,” he responded. Your partner’s suit, I was thinking. Opening 1 club might be as few as two cards in your system (and even 3+ wouldn’t make it “partner’s suit”). So how did he know it was his partner’s suit?