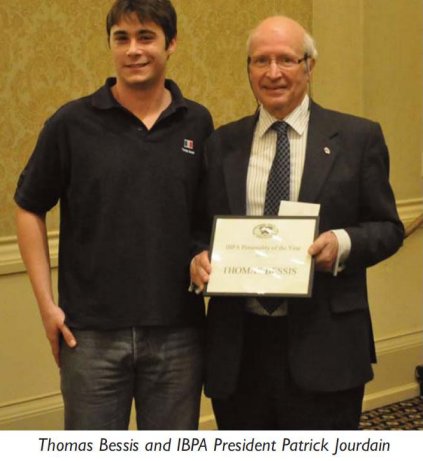 Thomas Bessis is one of the best players in the world, with numerous wins to his name. Above we see him receiving the 2010 IBPA Personality of the year award from IBPA president Patrick Jourdain. Below is what he thinks about Lotan Fisher.

My name is Thomas Bessis and I am a French professional bridge player since 2009.
I have known Lotan Fisher for 10 years now, and what I think about him has become worse and worse with the years.
Lotan has been banned from the Israeli bridge federation a few years ago, because he had been caught cheating during a tournament.
So when I still was considering him as a good guy and talking to him, I adviced him, after I heard he had psyched against a friend of mine in a French tournament: “You shouldn’t do that. With your history, if you really are straight, you should behave more than perfect at the table, and not be borderline, because otherwise people will always suspect you.”
This was during the summer 2010.
Since this time, Lotan has almost won everything he played, and all his wins have been surrounded by suspicions of cheating. Lotan clearly does not care about his reputation, as long as he wins. He does not even try to stop people spreading the rumor saying that the pair he is forming with Ron Schwartz is shady, there are just too many now.

As I wrote earlier, Lotan has almost won everything in the last two years, with his new partner Ron Schwartz. It kind of surprises me, as I consider Ron Schwartz to be a pretty weak player, incredibly weak regarding all his recent great achievements.

I had already written last year about Lotan Fisher, when isreali Yossi Engel asked me to. So I will not write again everything I had declared, even if I still think it. I allow you by the way to use any element of this letter I had written in august 2011.
I will therefore here only report the new elements I have compared to last year, and especially the episode in Monaco three weeks ago.

So I was in Monte-Carlo a few weeks ago (mid October) to play one of the most prestigious invitational bridge tournaments, with a lot of money involved: the Cavendish pairs. It was for the first time scheduled in Europe – it’s usually attended in Las Vegas – so for the first time, the biggest European champions were competing, whereas they usually not come when it’s in Las Vegas. As it was a first time too, the organizers wanted to welcome everybody, to make this event a big success, and they financially helped many competitors to come, as otherwise they would not be able to afford to. Lotan and Ron were competing in this event, and won it. Here are some facts about them from this competition:
The first unexpected fact occurred during the auction sale. Before the tournament starts, all the competing pairs are sold for a certain amount of money. The pairs expected to do well are of course sold for more than the other ones, and it was pretty surprising to see that the buyers got crazy about the pair Schwartz-Fisher: all the buyers there had heard about this young Israeli team, who has extremely good results since two years. But the “oldest” pair, the one that bridge players consider more, is Alon Birman and Dror Padon, as they really are the anchors of the team. But, « surprisingly », Fisher-Schwartz have interested much more the buyers than Birman-Padon, as Fisher-Schwartz, although it was their first appearance in the tournament, got sold in the top ten pairs (for 32K€ if I remember well).

Then, during the tournament itself, I played, as every other pair, against them, and something weird happened at the table.  After Ron Schwartz showed a 20-22 NT hand (2D multi then 2NT), Lotan Fisher, vulnerable with J653, 94, QJ82, 1042, passed the 2NT bid, not trying to get the game bonus vulnerable in 3NT (or 4S) while he knew that his side had 24-26 HCP combined !
His partner had “of course” only 20 HCP, and played so bad that he went down in 2NT while the rest of the field went down one in 3NT, sometimes even making. What was the bad play? Ron Schwartz had himself K9xx in diamond, opposite QJ8x. He played the diamond suit starting with a low from his hand to dummy’s jack, which held the trick, followed by… the Queen of diamond from dummy ! This way, as there was no entry in dummy, he could not take A10xx in either hand!! I had A10xx on his left, so he could have picked them and make his contract easily. Of course, judging someone on one particular hand is not appropriate, but as it is one example among many others… Besides, it was board 15 of the first session, so nobody was either tired or not awake enough yet.
Right after the second board was played, I called the director, to report what had happened on board 15, and I challenged him to find one single player in the room who would pass the 2NT bid showing 20-22 NT with Lotan’s cards.

So what does this prove?
— Ron Schwartz is definitely not at the level of the rest of the field. So, to see him winning this event, as many other competitions, is more than suspect to me.
— I deeply think that Fisher-Schwartz help each other by indicating to their partner of they are minimum or maximum of the range they showed. Otherwise, Lotan’s pass is absolutely unexplainable.
— We actually are a whole community to think what I think ; right after my incident at the table against Ron and Lotan, many people (bridge players) came to me after they heard I had called the director against Lotan : about 10 bridge stars immediately came to me and told me such things as : « Whatever happened, I am with you » or « Whatever happened, I think the same than you », or again « If you need someone to punch him once for all, I’m your man »

Their incredibly high score: even the internationally known pair Levin-Weinstein, triple winners of the event on the last 4 years, weren’t doing comparable scores. They were ending up winning, ok, but it was always tight. In a field such as this one, which I consider much stronger than when the competition is held in Las Vegas – as about half of the players have won at least one international title -, ending up winning 2 imps per board has never been seen before and will probably not be seen soon again. So, they probably have been very lucky, that is for sure. But I do believe that in my sport, luck is not all. Of course it’s impossible to win without being a bit lucky, but on the other hand luck is not the only factor; you also need to play well. And I am sure that Lotan and Ron do not play well enough to have the result they had there.

The organizing team of the tournament has already decided to forbid them to play next year, as many top players complained about their presence there. This is quite a difficult position to take for organizers, as there officially is nothing else than rumors, so it would be quite a big thing if it happens.
Nothing is official yet though, but investigations have started.

So you might think: “If all this is true, if it is so clear to everybody, why haven’t they been caught yet?”
– Discipline instances and ruling in our game are not made to catch cheaters quickly. The procedure is long, and in order to start an official investigation, you need to have real facts that bridge directors don’t always have.
– Bridge players lack intelligence in this field: instead of calling the director anytime something seems suspect to them, they prefer to talk about the board with their friends, and spread rumors, which have no legitimacy at all for directors, and which don’t help catching the cheaters.
This also explains why there still are some other international pairs in the bridge world, also very suspected, who still are playing at high level.

I actually cannot believe what I am writing. Those two guys are still juniors, so very young, and they should be the light of our sport. People should be happy for them, happy to see that a new very young generation is already at the Top of the game, and ready to fight against the older ones.
Yes, it should be like that, but the fact is… nobody is happy. They are so young and already so much suspected, how is it possible??? People usually like to be blind about this kind of problems, and prefer to think that the other players are straight; it’s so much easier and so much better to think this way…

I will finish this on this well-thought comparison.
As with Lance Armstrong in cyclism, everybody “knew” he had taken some illegal medicine; winning seven Tour de France in a row, coming back from a recovered cancer, was just impossible without cheating. But it was so much more convenient to think he was straight, and to consider him as a god. It is very natural to prefer dreaming, to see the world in pink.
But believe me, the Fisher-Schwartz case is not pink at all…